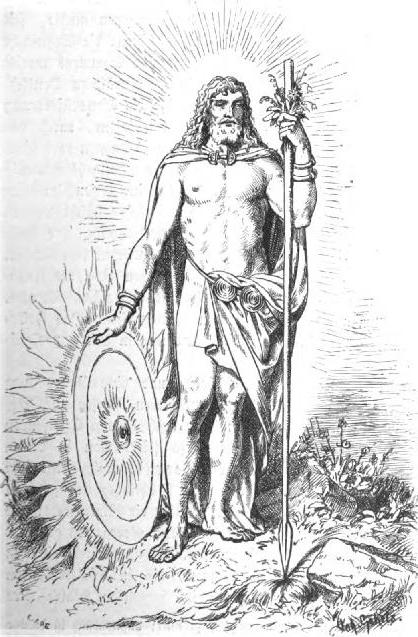 The Summer Solstice, a date decided by the movement of our nearest star and not by a fixed artificial calendar, is one of the primary eight festivals observed today by contemporary Pagans. Festivals and rituals are held nationally, the most famous being Stonehenge and Avebury in Wiltshire. However, there are perhaps many more Pagans who rather than travel to a national shrine, will choose to observe the festival locally.

The symbolism of the Solstice as a religious event of deep spiritual significance is almost too personal for many Pagans to express in words. The individual is far more likely to be touched deep inside and will therefore, feel intuitively an inexpressible union with the Divine, in whatever way they may perceive it.

The Summer Solstice marks the point of greatest light, a promise of the warmest months, growth and harvest. Yet by being the Sun’s highest point this also marks the moment when the hours of daylight will no longer be greater than the hours of darkness. Just as night must follow day, darkness must follow light and invariably, winter must follow summer.

This realisation that life is a cycle, that there is a balance of light and dark, that the waxing and waning energies are part of that cycle, lies for some at the heart of Paganism as a spiritual path.

In an earlier published work (Pagan symbolism within the Sherwood Legends, in the Hedgewytch issue 50 May/Beltane 2010 pp20-23), I have sought to explore the symbolism of the Sherwood Tradition and its relationship to the division of the light and dark halves of the year. In doing so, I offered the example of the Sherwood Legends as a valid reason for dividing the year at the equinoxes in comparison to the Arthurian Cycle and the division of the year at the solstices.

The mythological key of the Arthurian Cycle that is comparable to that of the Sherwood Legends previously mentioned is the relationship between Arthur, his sister Morgan of the Fay and their son by an incestuous liaison, Mordred.

In the final battle, Arthur and Mordred meet in combat and although Mordred is slain, he gives his father a mortal wound. Here Arthur is the Sun King representing the light half of the year, while his son Mordred is comparable to Guy of Gisbourne in the Sherwood Legends and a representative of the dark half of the year. Arthur is also the Christ, the Sun King sacrificed for his people and suffering a mortal wound.

The battle between Arthur and Mordred is a representation of the Summer Solstice. Arthur is a king at the height of his powers but he is delivered of a mortal blow, so that although neither dead nor defeated, his powers now begin to wane. So it is at the Summer Solstice; as the Sun reaches the height of power and then begins to slowly diminish in strength. Mordred is defeated but only for a time, for as his father’s strength wanes his will increase until finally, in the Autumn, the hours of darkness are greater than the hours of daylight. 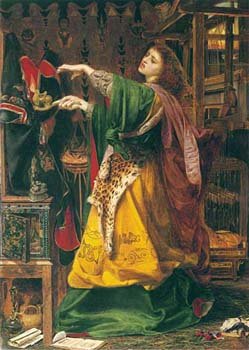 Morgan of the Fay as sister and mother of the two protagonists, here provides a link between the two and is a manifestation of the Goddess of Fate. Her very title “of the Fay” shows here very clearly her true identity as the Queen of Elfland. At the end of the battle, Arthur is taken by ship on a journey to the Otherworld accompanied by three queens, representations of the Fates found in both Classical and Norse Mythology. In some versions of the story, one of these queens is Morgan of the Fay herself. This paradox, that she is in part responsible for his defeat, yet is also his saviour is an illustration of the detached impartiality of Fate.

There is however, a third mythological stream or cycle that is very much worth exploring when discussing the division of the light and dark halves of the year. This third mythological thread lies within Northern Mythology and has as its focus the death of Baldur and his relationship with two of his brothers, Hodur and Vali. Northern Mythology is unfortunately a somewhat lesser known mystical stream with regard the general public but it is certainly no less significant than the Arthurian Cycle.

Woden (better known as Odin) and his wife Frigga (who is perhaps better known as Frig), have had many children. Two of these children are the twins Baldur the Fair and his brother Hodur the Blind, each equally devoted to the other. However, the Northern Gods are subject to fate and it is discovered that Baldur is fated to die. An attempt is therefore made by his mother to avoid fate and an agreement is sought in which all of creation shall swear an oath, not to harm Baldur the Fair God of Light. 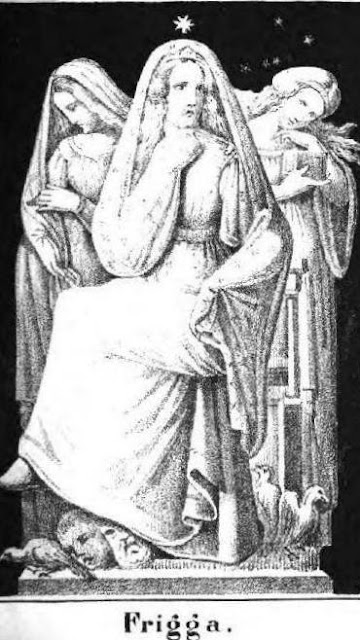 One plant, judged too young to swear an oath, is exempt from the agreement and this is mistletoe. It is such a small and insignificant plant, what possible harm could it cause to man, beast or god? However, the identity of this one plant is kept a secret and once the agreement is made and the oaths are sworn, the Gods celebrate by playing a throwing game with Baldur as a willing target.

Another God however, Loki has discovered the identity of the one plant that can now cause harm to Baldur and end the merriment of the Gods. He rides to Valhalla where mistletoe grows upon an oak close to the entrance. Here those familiar with the Celtic Tradition will note the symbolism of the mistletoe growing close to a doorway, drawing a link to both the Winter Solstice and the oak itself. However, it is worth considering that the mistletoe motif may be a later addition to this mythological cycle. 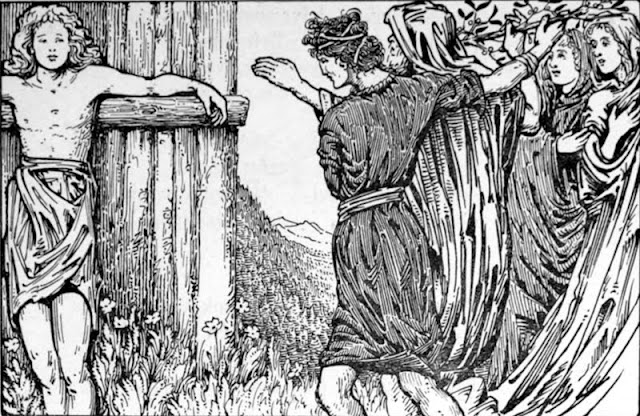 Using magic, Loki fashions a full size spear from a piece of mistletoe and returns to the celebrations. Here he finds Hodur, alone and feeling rather left out as being blind, he is unable to participate in the games. Loki kindly offers to help and to provide a missile and leading Hodur into the crowd, assists him in taking aim. Hodur throws the spear but instead of hearing yet more laughter there is a shocked silence, followed by a lament. Loki has made by now a discrete withdrawal, leaving Hodur heart-broken at the tragedy and mourning the loss of the brother, he loved so.

There is much more to this myth; which continues the story with an attempt to persuade Hel to release Baldur from the underworld and it is of great significance to followers and practitioners of the Northern Tradition and Wiccecraeft (Anglo-Saxon Witchcraft). We however, must jump ahead to the birth of the third brother featured here, Vali the Avenger. 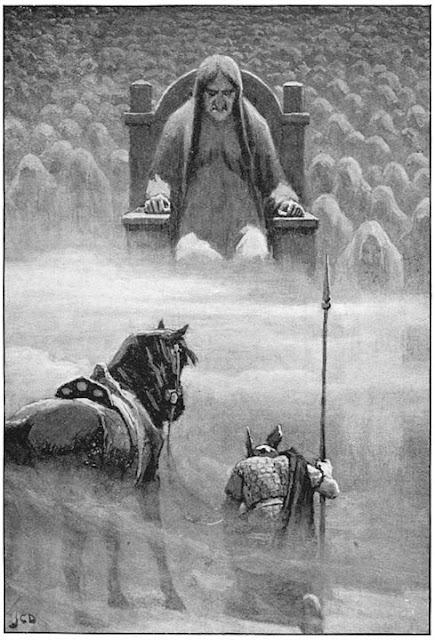 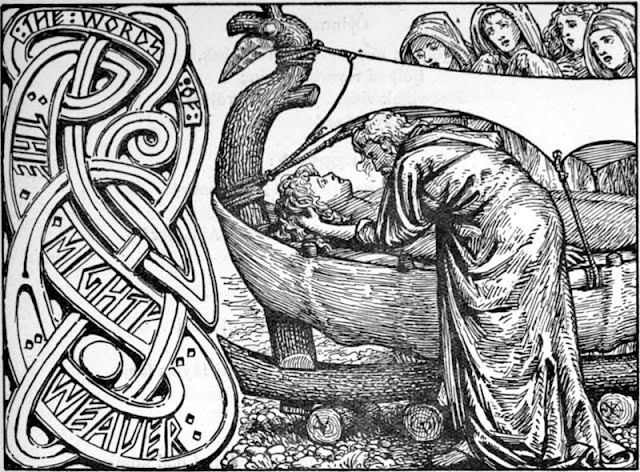 Vali is a son of Woden (Odin) but not a son of Frigga (Frig), as his mother is often identified as a giantess called Rind. On the same day of his birth, he grows to full manhood and enters Asgard with a bow and a quiver of arrows. It is with these weapons that he goes on to slay his elder brother Hodur and so avenge the death of Baldur. With this act of revenge, which is in part a requirement of the Norse concept of Fate, the tragedy finally ends. 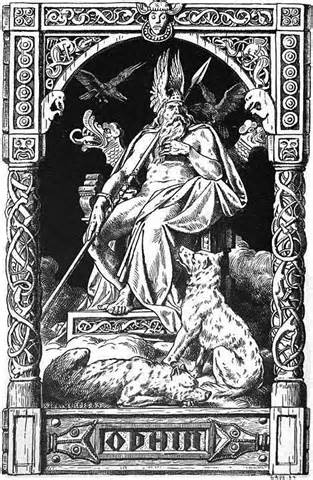 Vali the Avenger is quite obviously the returning light, the re-born Sun of the Winter Solstice and his arrows represent beams or shafts of light. His part in the cycle brings to a close the darkness of Winter, represented by that tragic figure, the blind god Hodur.

Baldur is here shown as a vegetation God that is cut down or harvested at the peak of his virility and therefore, parallels can be drawn with the symbolism of the sacrificial king. The king that at his height, must step down before his powers and therefore the power he shares with the land and the people will begin to wane.

The mythology of Baldur and his two brothers Hodur and Vali is a beautiful and powerful story and provides perfectly, a valid reasoning for the interpretation of the change at the Solstices. Which mythological cycle one favours Saxon, Arthurian or Northern, is a matter of personal gnosis and mythological interpretation. The death of Baldur and the birth of Vali, like the death of Arthur; presents us with an ideal symbolic representation of the death of the Summer Sun on the Summer Solstice and then the return of the light and the rebirth of the Sun at the Winter Solstice.

Vali as the returning light is both the Green Man and the Hunter. Furthermore, as a Divine Archer he equates symbolically with Robin Hood as a Saxon God of the hunt and in doing so, he brings us back full circle to the Sherwood Legends.