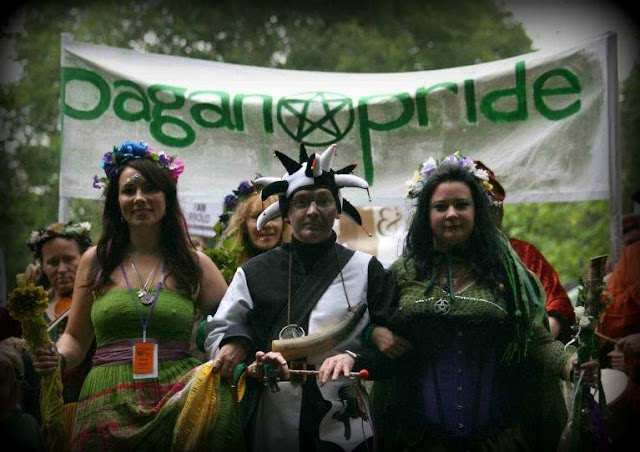 This year, Sunday the 4th of August (2013) will see another Pagan Pride event in Nottingham. Pagan Pride is a localised event with a national importance and an attendance that continues to grow each year. The organisation’s website will tell you that contrary to the generalised perception, Pagan Pride is more than just a one day festival. There is a philosophy behind Pagan Pride. The aim of Pagan Pride is to make a statement, to emphasise and support the place of the Pagan community within our greater mainstream society. By liaison with other existing Pagan Community service organisations, Pagan Pride seeks to raise public awareness of Paganism as an alternative but viable spiritual path, correcting misconceptions through education. The festival itself is a celebration of Paganism in both diversity and as a cultural identity. 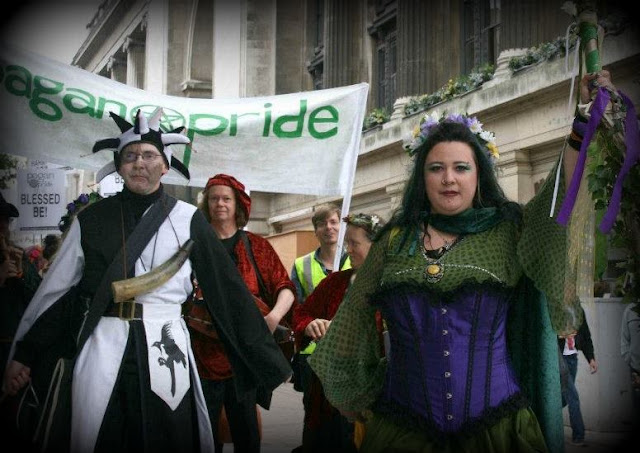 The Nottingham Pagan Pride was founded by Esme Knight in 2009 and the first Pagan Pride parade and festival took place the following year. Although officially a free event, like all free events someone does have to pay. Numerous events are organised throughout the year to raise funds for the single day event itself, to cover the ‘rent’ of the Arboretum and the necessary insurance. 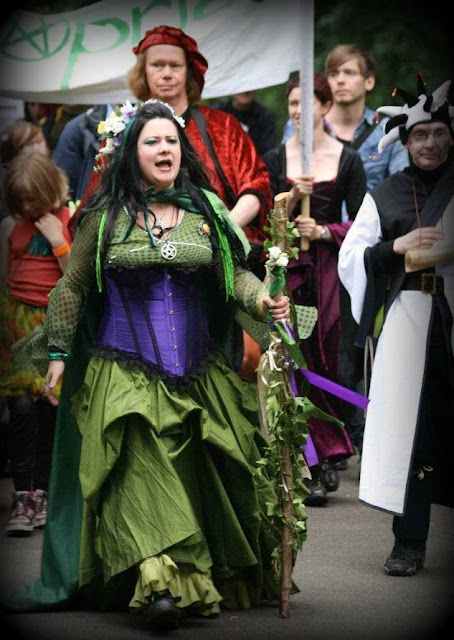 The event itself now follows a set format, with a gathering of several hundred Pagans and well wishers on the market place. An organised and carefully supervised if noisy march through the city then takes place, to eventually gather at the Arboretum and the site of the main event itself. 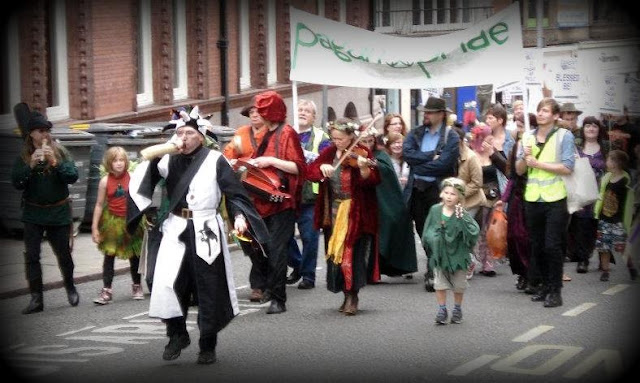 In 2012, I as the current East Midlands Pagan Federation Deputy District Manager had the very great honour to join Esme Knight, Charlotte Heloise Kingsbury and the other organisers in leading the parade through Nottingham. This I did in full black and white jester costume, complete with horn. I am highly qualified to play the Fool or a rather unseasonal Lord of Misrule. 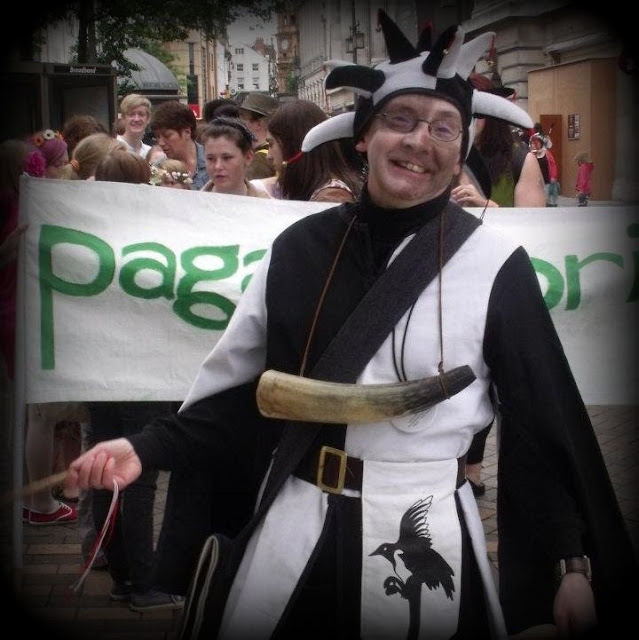 The 2012 parade was the largest gathering so far, seeing a doubling of numbers on previous years, with an estimated six hundred persons taking part. Many chose to walk in full costume or ritual dress, bringing musical instruments such as horns and drums. As a celebration of the diversity within Paganism, the parade offers a fine example of our community spirit. Many Pagan groups, based around moots or actual ritual working groups choose to parade in number, often bringing a specially made banner for the occasion.

Amongst those that marched was the Folk-rock Band Serpentyne, as usual dressed in full medieval costume and playing their amazing acoustic instruments. Later at the main site where several other bands were gathering, this amazing group would play their own acoustic set using replica medieval instruments. 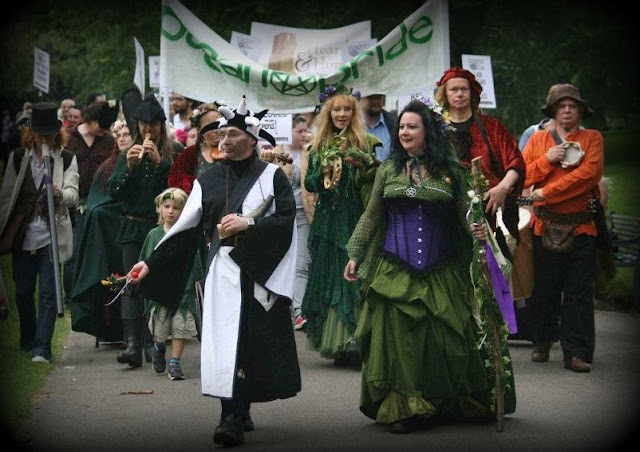 The main site at the Nottingham City Arbouretum was divided between the band stand acting as the main stage, a bar, a open air food area, an open air market, display areas for Belly and Morris dancing, together with meeting points and areas set aside for informal talks and lectures. The list of speakers, bands and dance troops is simply too long to list here. Several Pagan organisations had a presence at this vitally important community event, including the British Druid Network, Nottingham Pagan Network and the East Midlands Pagan Federation. The estimated attendance at the main site was put in the region of two thousand people. 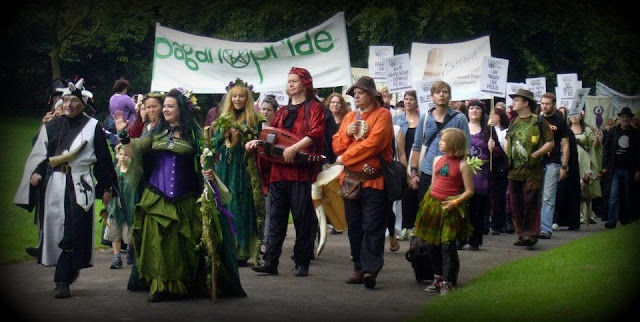 This year however, I will not be marching as I have been asked to give an informal talk, which I will do on the subject of why Interfaith matters. Nor will I appear in my now famous Lord of Misrule costume, as to give such a talk; I must on behalf of the Pagan Federation present a more professional image. Horror of horrors, I’m being made to wear a tie. 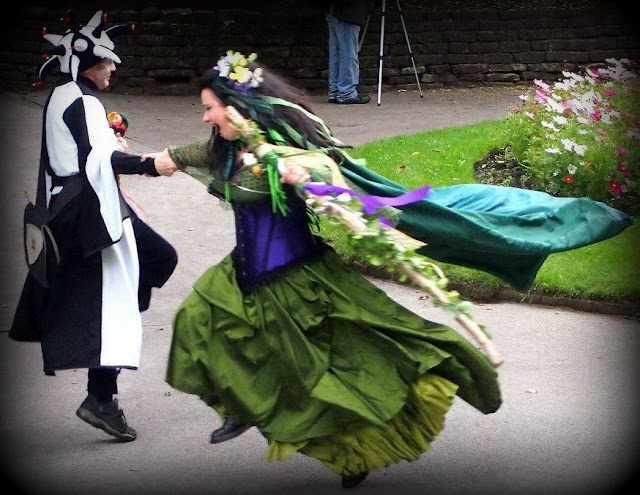 So if you are free on Sunday 4th of August (blatant plug), come over to Nottingham and join the parade, let us make it even bigger that 2012!

For more information on the work of the East Midlands Pagan Federation please see the website: http://paganfedeastmids.co.uk/
and the related Facebook group https://www.facebook.com/groups/EastmidsPFgroup/

For information on Pagan Pride and related events please see the website: http://www.paganpride.org.uk/ and the related Facebook group: https://www.facebook.com/PaganPrideUK

Polite reminder: the next Pagan Pride (Nottingham) Festival will be Sunday the 4th of August 2013.
Posted by Chattering Magpie at 22:26

Summoner and Robin of the Hearth of the Turning Wheel.